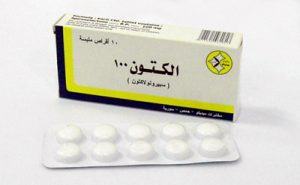 Spironolactone is a specific antagonist of aldosterone, acting primarily through competitive binding of receptors at the aldosterone-dependent sodium-potassium exchange site in the distal convoluted renal tubule. spironolactone causes increased amounts of sodium and water to be excreted, while potassium is retained. ALDACTONE acts both as a diuretic and as an antihypertensive drug

– spironolactone is rapidly and extensively metabolized

-Food increased the bioavailability of unmetabolized spironolactone by almost 100%.

Spironolactone is indicated in the management of:

-Hypokalemia: spironolactone is also indicated for the prophylaxis of hypokalemia in patients taking digitalis

-Usage In Pregnancy: spironolactone is indicated in pregnancy when edema is due to pathologic causes.

Spironolactone is contraindicated for patients with anuria, acute renal insufficiency, significant impairment of renal excretory function, hyperkalemia, Addison’s disease, and with concomitant use of eplerenone.

ACE inhibitors: Concomitant administration of ACE inhibitors with potassium-sparing diuretics has been associated with severe hyperkalemia.

Alcohol, barbiturates, or narcotics: Potentiation of orthostatic hypotension may occur.

Pressor amines (e.g., norepinephrine): spironolactone  reduces the vascular responsiveness to norepinephrine. Therefore, caution should be exercised in the management of patients subjected to regional or general anesthesia while they are being treated with spironolactone.

Nonsteroidal anti-inflammatory drugs (NSAIDs): administration of an NSAID can reduce the diuretic, natriuretic, and antihypertensive effect of loop, potassium-sparing, and thiazide diuretics. Combination of NSAIDs, e.g., indomethacin, with potassium-sparing diuretics has been associated with severe hyperkalemia.

Digoxin: spironolactone has been shown to increase the half-life of digoxin. This may result in increased serum digoxin levels and subsequent digitalis toxicity.

Cholestyramine: Hyperkalemic metabolic acidosis has been reported in patients given spironolactone  concurrently with cholestyramine.

-Concomitant administration of spironolactone with the following drugs or potassium sources may lead to severe hyperkalemia:

– spironolactone  should not be administered concurrently with other potassium-sparing diuretics.

– spironolactone should be used with caution in patients with impaired hepatic function because minor alterations of fluid and electrolyte balance may precipitate hepatic coma.

-Lithium generally should not be given with diuretics

-All patients receiving diuretic therapy should be observed for evidence of fluid or electrolyte imbalance, e.g., hypomagnesemia, hyponatremia, hypochloremic alkalosis, and hyperkalemia.

-Warning signs or symptoms of fluid and electrolyte imbalance, irrespective of cause, include dryness of the mouth, thirst, weakness, lethargy, drowsiness, restlessness, muscle pains or cramps, muscular fatigue, hypotension, oliguria, tachycardia, and gastrointestinal disturbances such as nausea and vomiting. Hyperkalemia may occur in patients with impaired renal function or excessive potassium intake and can cause cardiac irregularities, which may be fatal.

-Reversible hyperchloremic metabolic acidosis, usually in association with hyperkalemia, has been reported to occur in some patients with decompensated hepatic cirrhosis, even in the presence of normal renal function.

-hyponatremia, manifested by dryness of the mouth, thirst, lethargy, and drowsiness and hyponatremia may occur in edematous patients in hot weather; appropriate therapy is water restriction rather than administration of sodium

– spironolactone therapy may cause a transient elevation of BUN, especially in patients with pre-existing renal impairment. Spironolactone may cause mild acidosis

–Gynecomastia may develop in association with the use of spironolactone

–Somnolence and dizziness have been reported to occur in some patients. Caution is advised when driving or operating machinery.

Pregnancy: Category C: the use of spironolactone in pregnant women requires that the anticipated benefit be weighed against the possible hazards to the fetus.

Nursing Mothers: a decision should be made whether to discontinue the drug, taking into account the importance of the drug to the mother, if use of the drug is essential, an alternative method of infant feeding should be instituted.

Periodic determination of serum electrolytes to detect possible electrolyte imbalance should be done at appropriate intervals, particularly in the elderly and those with significant renal or hepatic impairments.

Long Test: spironolactone is administered at a daily dosage of 400 mg for three to four weeks

Short Test: spironolactone is administered at a daily dosage of 400 mg for four days

–Edema In Adults (Congestive Heart Failure, Hepatic Cirrhosis, Or Nephrotic Syndrome):An initial daily dosage of 100 mg of spironolactone administered in either single or divided doses is recommended, but may range from 25 to 200 mg daily.

–Essential Hypertension:For adults, an initial daily dosage of 50 to 100 mg of spironolactone administered in either single or divided doses is recommended.

–Hypokalemia: spironolactone in a dosage ranging from 25 mg to 100 mg daily is useful in treating a diuretic-induced hypokalemia.

Acute overdosage of spironolactone may be manifested by drowsiness, mental confusion, maculopapular or erythematous rash, nausea, vomiting, dizziness, or diarrhea.

Treatment: Induce vomiting or evacuate the stomach by lavage. Treatment is supportive to maintain hydration, electrolyte balance, and vital functions.

Keep in a dry place below 30°C – Out of reach of children.