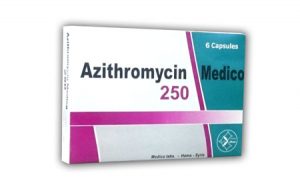 Azithromycin – Medico (Azithromycin) is an azalide, derived from the macrolide class of antibiotics. Following oral administration in humans, Azitromycine – Medico is wildly distributed throughout the body.

The time taken to peak plasma levels is 2 – 3 hours.

Kinetic studies have shown markedly higher Azitromycine – Medico levels in tissue than in plasma ( up to 50 times the maximum observed concentration in plasma ) indicating that the drug is Highly tissue bound .Concentration in target tissues such as lung , tonsil and prostate exceed the MIC90 for likely pathogens after a single dose of 500 mg.

Azithromycin – Medico (azithromycin) is indicated for the treatment of patients with mild to moderate infections caused by susceptible strains of the designated microorganisms in the specific conditions listed below:

NOTE: Azithromycin should not be used in patients with pneumonia who are judged to be inappropriate for oral therapy because of moderate to severe illness or risk factors such as any of the following:

patients with known or suspected bacteremia,

elderly or debilitated patients, or patients with significant underlying health problems that may compromise their ability to respond to their illness (including immunodeficiency or functional asplenia).

Azithromycin – Medico is contraindicated in patients with known hypersensitivity to Azitromycine – Medico or any of the macrolide antibiotics.

Azithromycin – Medico is well tolerated . Most side effects observed were mild to moderate in severity The majority of side effects were gastrointestinal in origin with nausea, abdominal discomfort (pain / cramps), vomiting, flatulence, diarrhea and loose stools being occasionally observed .

Allergic reactions such as rash have occurred and there have also been rare reports of serious Hypersensitivity reactions.

Transient mild reductions in neutrophil counts have occasionally been observed.

As with other erythromycin and other macrolide, rare serious allergic reactions, including Angioneurotic oedema and anaphylaxis have been reported As with any antibiotic, observation for signs of super infection with non susceptible organisms, Including fungi is recommended .

Hepatic Impairment: Azitromycine – Medico should not be used in patients with hepatic disease .

Pregnancy, Pregnancy Category B: azithromycin should be used during pregnancy only if clearly needed.

The recommended dose of Azithromycin – Medico for the treatment of community-acquired pneumonia of mild severity, pharyngitis/tonsillitis (as second-line therapy), and uncomplicated skin and skin structure infections due to the indicated organisms is: 500 mg as a single dose on the first day followed by 250 mg once daily on Days 2 through 5.

The recommended dose of Azithromycin – Medico for the treatment of mild to moderate acute bacterial exacerbations of chronic obstructive pulmonary disease is: either 500 mg per day for 3 days or 500 mg as a single dose on the first day followed by 250 mg once daily on Days 2 through 5. Azitromycine – Medico  tablets can be taken with or without food.

Keep Azithromycin – Medico out of the reach of children