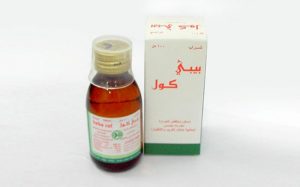 Properties :
Bebe col contains a number of effective materials that have an active effect in the case of
infection of the respiratory system , and the upper respiratory tracts becusae it is considered that :
– Sod .Benzoate : is an expectorant for its active effect in melting the secretions of bronchi .
– Diphenhydramine : is an anti – cough for its inhibition of cough centers in the medulary
bulb , it prevents the bronchial spasm , so it relaxes the plain muscles of the bronchi .
-Paracetamol : An effective analgesic and antipyretic .

Indications :
– Prevents fever in Infants and children associated with inflammation of respiratory tracts in the cases of influenza .
– As tranquilizer in all cases of cough which have non – hereditary origin especially the irritative and allergic cough .
– The infections of respiratory tract caused by the disturbances of the mucous secretion production.

Contra indications :
– Because of the atropinic effect of the diphenhyramine , it could not be given in cases of closed angle glocoma , and urea retention combined with ureteral prostatic disturbances .
– Dosage should not be increased spontaneously if the cough does not stop only under physician supervision .

Side effects :
– Drowsiness .
– Atropinic effects as the increasing of the viscosity of the bronchial secretions ,
disturbances of the accommodation , urea retention , constipation and mental confusion or
excitement at the elders .
– Rare cases of gastro intestinal effects .
– Rare cases of leukopenia and granulopenia .
– Some cases of excitement may occur at children and infants babies if the dose is
increased.

Drug interactions:
Bebe col should not be given with medicines such as :
1- The depressants of central nervous system ( somnifacient and narcotics ).
2- Medicine which have atropinic effect (antihistaminic , antidepressants from the group of
the imipramines , antipsychotic from the group of the phenothiazine ,antiparkinson ,
anticholinegics , atropinic antispasmodics , and dispramide ) .