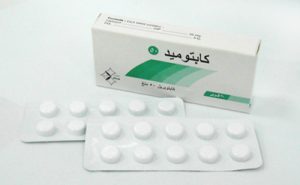 Captopril is a specific competitive inhibitor of ( ACE ) ( angiotensin I converting
enzyme),enzyme that converts angiotensin I to angiotensin II .
Captopril produces a reduction in peripheral resistance in hypertensive patients with either No change
or an increase in cardiac out put . Clinical significant reductions in blood pressure are often observed
60 to 90 minutes after oral administration of Captopril .
Indications and usage :
Hypertension : Captomed 25 – 50 is indicated for the treatment of hypertension alone and in
combination with other antihypertensive agents , especially thiazide-type diuretics .
Heart failure : Captomed 25 – 50 is indicated in the treatment of congestive heart failure usually in
combination with diuretics and digitalis .
Left ventricular dysfunction after myocardial infraction :
Captomed 25 – 50 is indicated to improve survival following myocardial infraction in clinically
stable patients with left ventricular dysfunction , and reduce the incidence of overt heart failure and
subsequent hospitalizations for congestive heart failure in these patients .
Contraindications :
A history of previous Hypersensitivity to Captopril .
Pregnancy categories C ( first trimester ) and D (second and third trimesters )
Female patients of childbearing age should be told about the consequences of second-and third trimester exposure to (ACE ) inhibitors , these patients should be asked to report pregnancies to their
physicians as soon as possible .
Side effects :
Following side effects may occur rarely :
Rash , often with pruritus and sometimes with fever, photosensitivity , a reversible penphigiod like
lesion , elevation of liver enzyme , gastric irritation , abdominal pain neutropenia / agranulocytosis ,
cases of anemia, cough .
Cardiovascular : hypotension may occur in patients with heart failure , rennin-dependent hypotension
or who are significantly volume depleted .
Afew patients have developed swelling of the face , mucous membranes of the mouth , and the
extremities which is reversible upon discontinuation of the drug
Precautions :
Impaired Renal Function :
some patients with renal disease , particularly those with sever renal artery stenosis have developed
increases in ( BUN) and serum creatinine after reduction of blood pressure with Captopril , Captopril
dosage reduction and / or discontinuation of diuretic may be required . Heart failure : about 20% of
patients develop stable elevelop stable elevations of BUN serum Creatinine , less than 5% of patients
those with severe preexisting renal disease , required discontinuation of treatment . Hyperkalemia :
elevations in serum potassium have been observed patients at Risk for development of hyperkalemia
include those with renal insufficiency , Diabetes mellitus ; and those using concomitant
potassium-sparing diuretics,
Cough :ACE inhibitor-induced cough should be considered in the differential diagnosis of cough .
Valvular stenosis : the patients with aortic stenosis might be particular risk of decreased coronary
perfusion when treated with vasodilators .
Surgery / Anesthesia :
in patients under going major Surgery or during anesthesia with agents that produce hypotension ,
Captopril will block angiotensin II Hemodialysis : recent clinical observation have shown an
association of hypersensitivity like reactions during Hemodialysis in patients receiving ACE
inhibitors .
Drug interactions :

Captomed should not ne taken with potassium-sparing diuretics , potassium supplements and lithium . Indomethacine and other NSAIDS may reduce the antihyperrensive effect of Captopril .

Diuretics and other antihyperrensive agents enhance the hopotensive effect of Captopril
Caution should be exercised in prescribing Captopril for patients receiving concomitant therapy with
immunosupperessants , and other drugs known to cause neutropenia .
Dosage & administration :

Hypertension : the initial dose of Captopril is 25 mg ( 2 – 3 ) times daily
if satisfactory reduction of blood pressure has not been achieved after one or two weeks , the dose
may be increased to 50 mg ( 2- 3 ) times daily ( not exceed 50 mg three times daily ) . if the blood
pressure has not been satisfactory controlled after one to two weeks at this dose , a modest dose of
thiazide-type diuretic should be added.
Heart failure : the usual starting dose is 25 mg three times daily , a starting dose of 6.25 mg or 12.5
mg three times may minimize the duration of any transient hypertensive effect . usually it has been
added to conventional treatment with diuretic and / or digitalis After a dose of 50 mg three times
daily is reached , further increases in dosage should be delayed to determine if a satisfactory
Response occurs .
Left ventricular dysfunction after myocardial infraction :
The recommended dose for long term use in patients following a myocardial infraction is a target
maintenance dose is 50 mg tid . therapy may be initiated as early as three days following a
myocardial infraction .
After a single dose of 6.25 mg Captopril therapy should be initialed at 12.5 mg tid. Captopril should
then be increased to 25 mg tid during the next several days and to a target dose of 50 mg. tid over the
next several weeks as tolerated .
Captopril may be used in patients treated with other post-myocardial infraction Therapies , e.g
thrombolytics , aspirin , beta-blockers .
Storage conditions : store up to 25oC