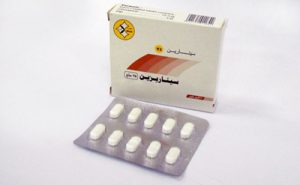 Cinnarizine’s action in the treatment of peripheral vascular disease is due to its anti-vasoconstrictor properties, its action on blood hyperviscosity and its anti-ischaemic effect. Anti-vasoconstriction is thought to be through a calcium blocker mechanism and is evident selectively in vascular smooth muscle. Increased peripheral muscle blood flow may be mediated by prevention of calcium entry into ischaemic erythrocytes, thereby preserving flexibility.

Absorption: The peak plasma levels of cinnarizine are obtained 1 to 3 hours after intake.

Metabolism: Cinnarizine is extensively metabolised mainly via CYP2D6 in the liver.

Distribution: The plasma protein binding of cinnarizine is 91%.

Elimination: The elimination of metabolites occur about one third in the urine and two thirds in the faeces. Plasma elimination half life is 3 to 4 hours.

Cinnarizine is indicated in peripheral vascular disease when such symptoms as intermittent claudication and cold extremities exist and in vasospastic disorders.

In patients with known hypersensitivity to cinnarizine.

Concurrent use of alcohol, CNS depressants or tricyclic antidepressants may potentiate the sedative effects of either these drugs or of Cinnarizine.

The safety of Cinnarizine in human pregnancy has not been established although studies in animals have not demonstrated teratogenic effects. As with other drugs, it is not advisable to administer Cinnarizine in pregnancy.

Cinnarizine may cause drowsiness, especially at the start of treatment; patients affected in this way should not drive or operate machinery.

Cinnarizine should preferably be taken after meals. These doses should not be exceeded.

Use in children: It is not recommended.

Peripheral arterial disease is slow to improve with any form of drug treatment. Maximum benefits with it will not be seen until after several weeks of continuous treatment although significant improvement in blood flow has frequently been demonstrated after 1 week. The dosage may vary slightly, depending on the condition of the patient.

Symptoms: Acute cinnarizine overdoses have been reported with doses ranging from 90 to 2,250 mg. The most commonly reported signs and symptoms associated with overdose of cinnarizine include: alterations in consciousness ranging from somnolence to stupor and coma, vomiting, extrapyramidal symptoms, and hypotonia. In a small number of young children, seizures developed. Deaths have been reported after single and polydrug overdoses involving cinnarizine.

Treatment: There is no specific antidote; the treatment is symptomatic and supportive care. Within the first hour after ingestion, gastric lavage may be performed. Activated charcoal may be given if considered appropriate.

Store in a dry and cool place under 20°C.