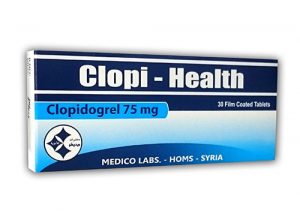 Clopidogrel is an inhibitor of platelet activation and aggregation through the irreversible binding of its active metabolite to one class ADP receptors on platelets.

Clopidogrel must be metabolized by CYP450 enzymes to produce the active metabolite. The active metabolite of clopidogrel selectively inhibits the binding of adenosine diphosphate (ADP) to its receptor and the subsequent activation of the glycoprotein GPIIb/IIIa complex, thereby inhibiting platelet aggregation for their lifespan. Elderly (≥75 years) and young healthy subjects had similar effects on platelet aggregation.

Absorption: After oral doses, clopidogrel is rapidly absorbed. Absorption is at least 50%, based on urinary excretion of clopidogrel metabolites.

Metabolism : Clopidogrel is a prodrug and it is metabolized by two main metabolic pathways: one leading to an inactive metabolite and one mediated by multiple cytochrome P450 and lead to the formation of the active metabolite, a thiol derivative that binds rapidly and irreversibly to platelet receptors, Cmax occurs approximately 30 to 60 minutes after dosing

Elimination: After a single, oral dose of 75 mg, clopidogrel has a half-life of approximately 6 hours. The half-life of the active metabolite is about 30 minutes

For patients with ST-elevation myocardial infarction, clopidogrel bisulfate has been shown to reduce the rate of death from any cause and the rate of a combined endpoint of death, reinfarction, or stroke. The benefit for patients who undergo primary percutaneous coronary intervention is unknown.

The optimal duration of clopidogrel bisulfate therapy in ACS is unknown.

In patients with active pathological bleeding such as peptic ulcer or intracranial hemorrhage.

In patients with hypersensitivity (e.g., anaphylaxis) to clopidogrel or any component of the product.

Thienopyridines, including clopidogrel, increase the risk of bleeding. If a patient is to undergo surgery and an antiplatelet effect is not desired, discontinue clopidogrel 5 days prior to surgery.

The inhibition of platelet aggregation is for the lifetime of the platelet (7 to 10 days), so withholding a dose will not be useful in managing a bleeding event or the risk of bleeding associated with an invasive procedure. Because the half-life of clopidogrel’s active metabolite is short, it may be possible to restore hemostasis by administering exogenous platelets; however, platelet transfusions within 4 hours of the loading dose or 2 hours of the maintenance dose may be less effective.

Lapses in therapy should be avoided, and if clopidogrel must be temporarily discontinued, restart as soon as possible. Premature discontinuation may increase the risk of cardiovascular events.

Patients with Recent Transient Is chemic Attack (TIA) or Stroke:

TTP, sometimes fatal, has been reported following use of clopidogrel bisulfate, sometimes after a short exposure (<2 weeks), and it is a serious condition that requires urgent treatment including plasmapheresis (plasma exchange). It is characterized by thrombocytopenia, microangiopathic hemolytic anemia, neurological findings, renal dysfunction, and fever.

There are no adequate and well-controlled studies in pregnant women. Clopidogrel should be used during pregnancy only if clearly needed.

It is not known whether this drug is excreted in human milk. Because many drugs are excreted in human milk and because of the potential for serious adverse reactions in nursing infants from clopidogrel, a decision should be made whether to discontinue nursing or to discontinue the drug, taking into account the importance of the drug to the mother.

Pediatric Use: Safety and effectiveness in pediatric have not been established

Geriatric Use: No dosage adjustment is necessary in elderly patients.

No dosage adjustment is necessary in patients with hepatic impairment

Concomitant use with omeprazole or esomeprazole should be avoided, because both significantly reduce the antiplatelet activity of clopidogrel. Consider using another acid-reducing agent with minimal or no CYP2C19 inhibitory effect on the formation of the active metabolite. Dexlansoprazole, lansoprazole and pantoprazole had less effect on the antiplatelet activity of clopidogrel than did omeprazole or esomeprazole

Coadministration with NSAIDs increases the risk of gastrointestinal bleeding.

Coadministration with warfarin increases the risk of bleeding because of independent effects on hemostasis.

Clopidogrel tablets can be administered with or without food

Platelet inhibition by clopidogrel is irreversible and will last for the life of the platelet. Overdose following clopidogrel administration may result in bleeding complications.