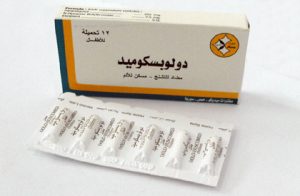 The antispasmodic agent Hyoscine N-butylbromide is well tolerated and specifically relieves spasm in the smooth muscle of the gastro-intestinal, biliary and urinary tracts and female genital organs
The analgesic properties of paracetamol provide a logical addition to this action . The combined antispasmodic and analgesic action makes Dolo Buscomed specially suitable for the treatment of Paroxysmal pain in the hollow organs of the abdomen .

Pharmacokinetics :
Upon oral administration , Hyoscine N-butylbromide is quickly absorbed by the tissue and concentrates
especially in the tissue of the gastrointestinal tract , liver and kidneys . The high affinity of this agent to the tissue is reflected by the very short half-life (t) of 3 minutes ( distribution phase ) of the blood levels , while the excretion rates are slow .Thus, in spite of the extremely low blood levels measurable over a short period of time Hyoscine-N-butylbromide remains available at the site of action in the tissue in high concentrations .
Paracetamol : is rapidly absorbed from the gastrointestinal tract. It is metabolized and inactivated in the Liver, primarily through conjugation into clucurinides; sulfates and cystein derivatives are also found. Paracetamol is excreted renally, with an elimination half-life of 2 to 4 hours .
Indications : Paroxysmal pain in diseases of the stomach or intestine, spastic pain and functional disorders in the biliary and urinary tracts and female organs (e.g. dysmenorrhoea ).

Special Precautions :
Dolo Buscomed should be used with caution in :
hepatic dysfunction ( e.g. due to chronic alcohol abuse, hepatitis )
Renal dysfunction
Gilbert´s syndrome (Meulengracht´s disease )
In such cases Dolo Buscomed should only be used under medical supervision and, if necessary,
The dose reduced or the intervals between the individual administrations prolonged .
Pregnancy and Lactation : Available but limited preclinical data has shown no hazard , but safety during
human pregnancy has not yet been established . The usual precautions regarding the use of drugs at this time , especially during the First trimester, should be observed .
Hyoscine-N-butylbromide safety during lactation has not yet been established .
The active ingredient Paracetamol enters breast milk, but is not likely to affect the infant when therapeutic doses are used .

Following administration of Dolo Buscomed rubefaction may occur in rare cases, allergic
reactions with exanthema in very rare cases, allergic platelet deficiency (thrombocytopenia ) or reduction in leucocytes (leucopenia) in extremely rare cases. A reduction in granulocytes in the blood (agranulocytosis ) or a reduction in cellular blood elements (pancytopenia) have been described in isolated cases in connection with Paracetamol .
Spasms of the bronchial muscles in the case of asthma (bronchospasm ) may occur in predisposed patients (analgesic-induced asthma) in isolated cases.
In Dolo Buscomed overdosage there is a risk of sever liver damage due to Paracetamol .

Interactions :
Otherwise harmless doses of Paracetamol may cause liver damage if taken together with drugs leading to enzyme induction such as certain hypnotics and anti-epileptics (e.g. glutethimide , Phenobarbital , Phenytoin, carbamazepin ) as well as rifampicin . the same applies to alcohol abuse.
Where gastric emptying is slowed down, as for instance with propantheline, the absorption rate of Paracetamol may be reduced with the result that onset of action is delayed.
Acceleration of gastric emptying, e.g.after administration of metoclopramide , leads to an increase in the absorption rate . Combination with chloramphenicol can prolong the half-life with the risk of increased toxicity.
The clinical relevances of interactions between Paracetamol and Warfarin as well as coumarin derivatives cannot yet be assessed. Therefore, long-term use of Paracetamol in patients being treated with oral Anticoagulants is only advisable under medical supervision .

Dosage and Administration : Unless otherwise prescribed by the physician:
Tablets :
Adults : 1 – 2 tablets three times daily , swallowed whole with a little liquid.
The total daily dose should not exceed 6 tablets.
Suppositories :
Adults : 1 suppository Dolo buscomed adults introduced into the rectum 3 to 4 times daily .
Children : 1 suppository Dolo buscomed children introduced into the rectum 3 times daily .
The total daily dose should not exceed 3 suppositories .
Dolo buscomed should not be taken over a prolonged period of time or in higher doses without a prescription from the doctor or dentist.

Overdosage : Symptoms :Symptoms of intoxication due to acute overdose with N-hyosine butylbromide have not been observed in man to data . In the case of severe paracetamol poisoning ( after administration of more than 10 g pure substance ) circulatory collapse ,acute renal insufficiency , icterus and hepatic coma may occur ; in the Case of chronic intoxication haemolytic anaemia, cyanosis , weakness, dizziness, paraesthesia,tremor,Insomnia, headache,failing memory, central nervous irritation,delirium and convulsions may occur.
Therapy: Overdosage of paracetamol entails the risk of liver necrosis. If nausea, vomiting, loss of appetite and abdominal pain occur after ingestion of Dolo buscomed , the administration of the drug should be stopped immediately and medical advice sought. It should be noted that symptoms of overdosage may only appear after several days.
In case of overdosage , specific measures taken within 10 hours of ingestion (gastric lavage, cysteamine,Oral L-methionine) will reduce the risk of liver damage. Additional treatment depends on the paracetamol blood level (higher than 120 mcg/ml 4 hours after ingestion ) . The patient should be transferred immediately to specialized hospital department for treatment .