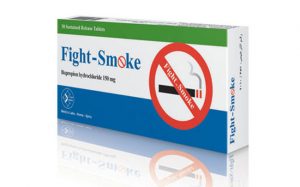 Fight – Smoke (bupropion hydrochloride) Sustained-Release Tablets are a non-nicotine aid to smoking cessation. Fight – Smoke is chemically unrelated to nicotine or other agents currently used in the treatment of nicotine addiction.

Bupropion is a relatively weak inhibitor of the neuronal uptake of norepinephrine, serotonin, and dopamine, and does not inhibit monoamine oxidase.

The mechanism by which Fight – Smoke enhances the ability of patients to abstain from smoking is unknown. However, it is presumed that this action is mediated by noradrenergic and/or dopaminergic mechanisms.

In vitro tests show that bupropion is 84% bound to human plasma proteins at concentrations up to 200 mcg/ml.

Fight – Smoke is indicated as an aid to smoking cessation treatment

1- Fight – Smoke is contraindicated in patients with a seizure disorder.

2-. Fight – Smoke is contraindicated in patients treated with any other medications that contain bupropion. because the incidence of seizure is dose dependent.

4- Fight – Smoke is contraindicated in patients undergoing abrupt discontinuation of alcohol or sedatives (including benzodiazepines).

5- Fight – Smoke is contraindicated in patients who are currently taking or have recently taken a monoamine oxidase inhibitor (MAOI);

6- Fight – Smoke is contraindicated in patients who are allergic to bupropion.

Fight – Smoke should not be used in combination with any other medications that contain bupropion.

Because the use of bupropion is associated with a dose-dependent risk of seizures, clinicians should not prescribe doses over 300 mg/day for smoking cessation. The risk of seizures is also related to patient factors, clinical situation, and concurrent medications, which must be considered in selection of patients for therapy with Fight – Smoke.

Recommendations for Reducing the Risk of Seizure:

2-the recommended daily dose for most patients (300 mg/day) is administered in divided doses (150 mg twice daily).

3-No single dose should exceed 150 mg to avoid high peak concentrations of bupropion and/or its metabolites.

Fight – Smoke should be administered with extreme caution to patients with a history of seizure, cranial trauma, or other predisposition(s) toward seizure, or patients treated with other agents (e.g., antipsychotics, antidepressants, theophylline, systemic steroids, etc.) that lower seizure threshold.

Fight – Smoke should be used with extreme caution in patients with severe hepatic cirrhosis. In these patients a reduced frequency of dosing is required, as peak bupropion levels are substantially increased and accumulation is likely to occur in such patients to a greater extent than usual. The dose should not exceed 150 mg every other day in these patients .

This drug should be used during pregnancy only if clearly needed. Pregnant smokers should be encouraged to attempt cessation using educational and behavioral interventions before pharmacological approaches are used.

Bupropion and its metabolites are secreted in human milk

The safety and efficacy in a pediatric smoking population have not been established Although generally well tolerated, the limited exposure is insufficient to assess the safety of bupropion in pediatric patients.

The elderly are at increased risk for accumulation of bupropion and its metabolites Because elderly patients are more likely to have decreased renal function, care should be taken in dose selection, and it may be useful to monitor renal function

Metabolic and Nutritional:    Infrequent were edema, increased weight, and glycosuria.

Usual Dosage for Adults:    The recommended and maximum dose of Fight – Smoke is 300 mg/day, given as 150 mg twice daily. Dosing should begin at 150 mg/day given every day for the first 3 days, followed by a dose increase for most patients to the recommended usual dose of 300 mg/day. There should be an interval of at least 8 hours between successive doses. Doses above 300 mg/day should not be used Fight – Smoke should be swallowed whole and not crushed, divided, or chewed.

Patients should set a “target quit date” within the first 2 weeks of treatment with Fight – Smoke, generally in the second week.

Treatment with Fight – Smoke  should be initiated while the patient is still smoking , since approximately 1 week of treatment is required to achieve steady-state blood levels of bupropion.

Treatment with Fight – Smoke should be continued for 7 to 12 weeks; longer treatment should be guided by the relative benefits and risks for individual patients.

Dosage Adjustment for Patients with Impaired Hepatic Function:    Fight – Smoke should be used with extreme caution in patients with severe hepatic cirrhosis. The dose should not exceed 150 mg every other day in these patients

Dosage Adjustment for Patients with Impaired Renal Function:    Fight – Smoke should be used with caution in patients with renal impairment and a reduced frequency of dosing should be considered

Controlled clinical studies conducted in normal volunteers, in subjects with a history of multiple drug abuse, and in depressed patients showed some increase in motor activity and agitation/excitement

In a population of individuals experienced with drugs of abuse, a single dose of 400 mg of Fight – Smoke produced mild amphetamine-like activity as compared to placebo on the Morphine-Benzedrine. These scales measure general feelings of euphoria and drug desirability.

Findings in clinical trials, however, are not known to predict the abuse potential of drugs reliably. Nonetheless, evidence from single-dose studies does suggest that the recommended daily dosage of bupropion when administered in divided doses is not likely to be especially reinforcing to amphetamine or stimulant abusers.

Deaths associated with overdoses of the immediate-release formulation of bupropion alone have been reported rarely in patients ingesting massive doses of the drug. Multiple uncontrolled seizures, bradycardia, cardiac failure, and cardiac arrest prior to death were reported in these patients.

Ensure an adequate airway, oxygenation, and ventilation. Monitor cardiac rhythm and vital signs. EEG monitoring is also recommended for the first 48 hours post-ingestion. General supportive and symptomatic measures are also recommended. Induction of emesis is not recommended. Gastric lavage with a large-bore orogastric tube with appropriate airway protection, if needed, may be indicated if performed soon after ingestion or in symptomatic patients.

Activated charcoal should be administered.

HOW SHOULD I STORE FIGHT – SMOKE?

Store Fight – Smoke at room temperature, out of direct sunlight.

Keep Fight – Smoke out of the reach of children.