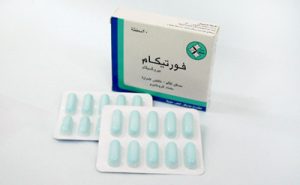 Piroxicam is a nonsteroidal anti-inflammatory drug (NSAID) that exhibits anti-inflammatory, analgesic, and antipyretic activities. Its mode of action, like that of other NSAIDs, is not completely understood, but may be related to prostaglandin synthetase inhibition.

Distribution: 99% of plasma piroxicam is bound to plasma proteins. Piroxicam is excreted into human milk.

Metabolism: studies indicate cytochrome P450 2C9 (CYP2C9) as the main enzyme involved in the formation of the major metabolite.

Excretion: Piroxicam and its biotransformation products are excreted in urine and feces, with about twice as much appearing in the urine as in the feces. Approximately 5% of a Piroxicam dose is excreted unchanged. The plasma half-life (T½) for piroxicam is approximately 50 hours.

Like other NSAIDs, piroxicam may cause CV side effects, Although serious CV events can occur without warning symptoms, physician and patients should be alert for the signs and symptoms of chest pain, shortness of breath, weakness, slurring of speech, and should ask for medical advice when observing any indicative signs or symptoms. To minimize the potential risk for this event in patients treated with an NSAID, the lowest effective dose should be used for the shortest duration possible.

NSAIDs, including piroxicam, can lead to onset of new hypertension or worsening of preexisting hypertension, which may contribute to the increased incidence of CV events. Therefore, it should be used with caution in patients with hypertension. Blood pressure should be monitored closely during the initiation of NSAID treatment and throughout the course of therapy.

Fluid retention and edema have been observed in some patients taking NSAIDs, piroxicam should be used with caution in patients with fluid retention or heart failure

NSAIDs should be prescribed with extreme caution in those with a prior history of ulcer or gastrointestinal bleeding, because they have an increased risk for developing a GI bleed. To minimize this risk, the lowest effective dose should be used for the shortest possible duration. Patients and physicians should remain alert for signs and symptoms of GI ulcerations and bleeding and promptly initiate additional evaluation and treatment if a serious GI event is suspected.

Long-term administration of NSAIDs has resulted in renal papillary necrosis and other renal injury. Studies indicate patients with mild to moderate renal impairment may not require dosing adjustments. However, the pharmacokinetic properties of Piroxicam in patients with severe renal insufficiency or those receiving hemodialysis are not known.

Treatment with piroxicam is not recommended in these patients with advanced renal disease. If piroxicam therapy must be initiated, close monitoring of the patient’s renal function is advisable.

NSAIDs, including piroxicam, can cause serious skin adverse events such as exfoliative dermatitis, Stevens Johnson Syndrome (SJS), and toxic epidermal necrolysis (TEN), which can be fatal. Patients should be informed about these signs and symptoms and the use of the drug should be discontinued at the first appearance of skin rash or any other sign of hypersensitivity.

A combination of dermatological and/or allergic signs and symptoms suggestive of serum sickness has occasionally occurred in conjunction with the use of piroxicam.

The pharmacological activity of piroxicam in reducing fever and inflammation may diminish the utility of these diagnostic signs in detecting complications of presumed noninfectious, painful conditions.

Notable elevations of ALT or AST have been reported in approximately 1% of patients in clinical trials, with NSAIDs. In addition, rare cases of severe hepatic reactions, including jaundice and fatal fulminant hepatitis, liver necrosis and hepatic failure, some of them with fatal outcomes have been reported. If clinical signs and symptoms consistent with liver disease develop, or if systemic manifestations occur (e.g., eosinophilia, rash, etc.), piroxicam should be discontinued. Patients with hepatic disease may require reduced doses of Piroxicam as compared to patients with normal hepatic function.

Patients on long-term treatment with NSAIDs, including piroxicam, should have their hemoglobin or hematocrit checked if they exhibit any signs or symptoms of anemia. Patients receiving piroxicam who may be adversely affected by alterations in platelet function, such as those with coagulation disorders or patients receiving anticoagulants should be carefully monitored

It is recommended that patients who develop visual complaints during treatment with piroxicam have ophthalmic evaluations.

Since cross-reactivity between aspirin and other nonsteroidal anti-inflammatory drugs has been reported in such aspirin-sensitive patients, piroxicam should not be administered to patients with this form of aspirin sensitivity and should be used with caution in patients with preexisting asthma.

Based on the mechanism of action, the use NSAIDs, including piroxicam, may delay or prevent rupture of ovarian follicles, which has been associated with reversible infertility in some women. In women who have difficulties conceiving or who are undergoing investigation of infertility, withdrawal of NSAIDs, including piroxicam, should be considered.

They should be administered Piroxicam with caution as they may have abnormally high plasma levels due to reduced metabolic clearance.

Safety and effectiveness in pediatric patients have not been established.

As with any NSAID, caution should be exercised in treating the elderly (65 years and older). In general, dose selection for an elderly patient should be cautious, usually starting at the low end of the dosing range, reflecting a greater frequency of impaired drug elimination and of concomitant disease or other drug therapy.

There are no adequate and well-controlled studies of piroxicam in pregnant women. During the first and second trimesters of pregnancy, use piroxicam only if the potential benefit justifies the potential risk to the fetus. In late pregnancy, as with other NSAIDs, it should be avoided because it may cause premature closure of the ductus arteriosus.

Piroxicam is present in human milk at about 1% to 3% of the maternal concentration. Exercise caution when piroxicam is administered to a nursing woman.

ACE-inhibitors: NSAIDs may diminish the antihypertensive effect of ACE-inhibitors. In elderly, volume-depleted patients (Including those on diuretic therapy), or with compromised renal function, co administration of NSAIDs with ACE inhibitors, may result in deterioration of renal function, including possible acute renal failure, these effects are usually reversible.

Aspirin: as with other NSAIDs, concomitant administration of Piroxicam and aspirin is not generally recommended because of the potential for increased adverse effects.

Diuretics: Piroxicam can reduce the natriuretic effect of furosemide and thiazides in some patients.

Lithium: Piroxicam produced an elevation of plasma lithium levels and a reduction in renal lithium clearance, when they are administered concurrently, subjects should be observed carefully for signs of lithium toxicity

Methotrexate: Caution should be used when NSAIDs are administered concomitantly with methotrexate, because studies may indicate that the concomitant use could enhance the toxicity of methotrexate.

Warfarin: The effects of warfarin and NSAIDs on GI bleeding are synergistic, such that users of both drugs together have a risk of serious GI bleeding higher than users of either drug alone.

In patients taking Piroxicam, the most frequently reported adverse experiences occurring in approximately 1–10% of patients are:

For the relief of rheumatoid arthritis and osteoarthritis, the recommended dose is 20 mg given orally once per day. If desired, the daily dose may be divided. Because of the long half-life of Piroxicam, steady-state blood levels are not reached for 7 – 12 days. Although the therapeutic effects of piroxicam are evident early in treatment, there is a progressive increase in response over several weeks and the effect of therapy should not be assessed for two weeks.

Patients should be managed by symptomatic and supportive care following an NSAID overdose. There are no specific antidotes. Emesis and/or activated charcoal (60–100 g in adults, 1–2 g/kg in children) and/or osmotic cathartic may be indicated. Forced diuresis, alkalinization of urine, hemodialysis, or hemoperfusion may not be useful due to high protein binding.

Storage conditions: keep in a cool and dry place under 20°C