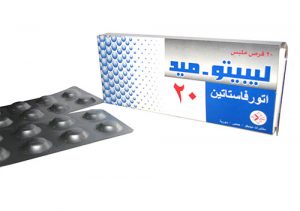 Atorvastatin is a selective, competitive inhibitor of HMG-CoA reductase, the rate-limiting enzyme that converts 3-hydroxy-3-methyl-glutaryl-coenzyme A to mevalonate, a precursor of sterols, including cholesterol. Clinical and pathologic studies show that elevated plasma levels of total cholesterol (total-C), LDL-cholesterol (LDL-C), and apolipoprotein B (apo B) promote human atherosclerosis and are risk factors for developing cardiovascular disease, while increased levels of HDL-C are associated with a decreased cardiovascular risk.

LIPITO-MED may cause fetal harm when administered to pregnant women. Therefore, HMG-CoA reductase inhibitors are contraindicated during pregnancy and in nursing mothers. If the patient becomes pregnant while taking this drug, therapy should be discontinued.

Because of the potential for adverse reactions in nursing infants, women taking LIPITO-MED should not breast-feed.

It is recommended that liver function tests be performed prior to and at 12 weeks following both the initiation of therapy and any elevation in dose, and periodically (eg, semiannually) thereafter.

LIPITO-MED should be used with caution in patients who consume substantial quantities of alcohol and/or have a history of liver disease.

LIPITO-MED therapy should be temporarily withheld or discontinued in any patient with an acute, serious condition suggestive of a myopathy or having a risk factor predisposing to the development of renal failure secondary to rhabdomyolysis (eg, severe acute infection, hypotension, major surgery, trauma, severe metabolic, endocrine and electrolyte disorders, and uncontrolled seizures).

Before instituting therapy with LIPITO-MED, an attempt should be made to control hypercholesterolemia with appropriate diet, exercise, and weight reduction in obese patients.

Patients should be advised to report promptly unexplained muscle pain, tenderness, or weakness, particularly if accompanied by malaise or fever.

The risk of myopathy during treatment with LIPITO-MED is increased with concurrent administration of cyclosporine, fibric acid derivatives, niacin (nicotinic acid), and erythromycin and azole antifungals.

Antacid: When LIPITO-MED and antacid were co-administered, plasma concentrations of LIPITO-MED decreased approximately 35%. However, LDL-C reduction was not altered.

Cimetidine: LIPITO-MED plasma concentrations and LDL-C reduction were not altered by coadministration of cimetidine.

HMG-CoA reductase inhibitors interfere with cholesterol synthesis and theoretically might blunt adrenal and/or gonadal steroid production. Clinical studies have shown that atorvastatin does not reduce basal plasma cortisol concentration or impair adrenal reserve. The effects of HMG-CoA reductase inhibitors on male fertility have not been studied in adequate numbers of patients. The effects, if any, on the pituitary-gonadal axis in premenopausal women are unknown. Caution should be exercised if an HMG-CoA reductase inhibitor is administered concomitantly with drugs that may decrease the levels or activity of endogenous steroid hormones, such as ketoconazole, spironolactone, and cimetidine.

The most frequent adverse events thought to be related to LIPITO-MED were constipation, flatulence, dyspepsia, and abdominal pain.

There is no specific treatment for LIPITO-MED overdosage. In the event of an overdose, the patient should be treated symptomatically, and supportive measures instituted as required. Due to extensive drug binding to plasma proteins, hemodialysis is not expected to significantly enhance LIPITO-MED clearance.

Since the goal of treatment is to lower LDL-C, the NCEP recommends that LDL-C levels be used to initiate and assess treatment response. Only if LDL-C levels are not available, should total-C be used to monitor therapy.

The dosage of Lipitor in patients with homozygous FH is 10 to 80 mg daily. Lipitor should be used as an adjunct to other lipid-lowering treatments (eg, LDL apheresis) in these patients or if such treatments are unavailable.

Atorvastatin may be used in combination with a bile acid binding resin for additive effect. The combination of HMG-CoA reductase inhibitors and fibrates should generally be avoided

Dosage in Patients with Renal Insufficiency

Renal disease does not affect the plasma concentrations nor LDL-C reduction of atorvastatin; thus, dosage adjustment in patients with renal dysfunction is not necessary

Keep away of reach of children