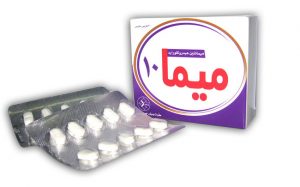 Persistent activation of central nervous system N-methyl-D-aspartate (NMDA) receptors by the excitatory amino acid glutamate has been hypothesized to contribute to the symptomatology of Alzheimer’s disease. Memantine is postulated to exert its therapeutic effect through its action as a low to moderate affinity uncompetitive (open-channel) NMDA receptor antagonist which binds preferentially to the NMDA receptor-operated cation channels. There is no evidence that memantine prevents or slows neurodegeneration in patients with Alzheimer’s disease.

Following oral administration memantine is highly absorbed with peak concentrations reached in about 3-7 hours, Memantine undergoes partial hepatic metabolism. The hepatic microsomal CYP450 enzyme system does not play a significant role in the metabolism of memantine. It is excreted predominantly in the urine, unchanged, and has a terminal elimination half life of about 60-80 hours. Food has no effect on the absorption of memantine.

MEMA (memantine hydrochloride) is indicated for the treatment of moderate to severe dementia of the Alzheimer’s type.

Seizures: MEMA has not been systematically evaluated in patients with a seizure disorder.

Hepatic Impairment: MEMA should be administered with caution to patients with severe hepatic impairment.

Renal Impairment: A dosage reduction is recommended in patients with severe renal impairment.

MEMA (memantine hydrochloride) is indicated for the treatment of moderate to severe dementia of the Alzheimer’s type.

– N-methyl-D-aspartate (NMDA) antagonists: The combined use of MEMA with other NMDA antagonists (amantadine, ketamine, and dextromethorphan) has not been systematically evaluated and such use should be approached with caution.

– Acetylcholinesterase (ACHE) inhibitors: Co-administration of MEMA with the AChE inhibitor donepezil HCl did not affect the pharmacokinetics of either compound. In a 24-week controlled clinical study in patients with moderate to severe Alzheimer’s disease, the adverse event profile observed with a combination of memantine and donepezil was similar to that of donepezil alone.

– Drugs eliminated via renal mechanisms: Because memantine is eliminated in part by tubular secretion, co-administration of drugs that use the same renal cationic system, including hydrochlorothiazide (HCTZ), triamterene (TA), metformin, cimetidine, ranitidine, quinidine, and nicotine, could potentially result in altered plasma levels of both agents.

– Drugs that make the urine alkaline: The clearance of memantine was reduced by about 80% under alkaline urine conditions at pH 8. Therefore, alterations of urine pH towards the alkaline condition may lead to an accumulation of the drug with a possible increase in adverse effects

–patients with severe renal impairment: A target dose of 5 mg BID is recommended.

– MEMA can be taken with or without food.

As in any cases of overdose, general supportive measures should be utilized, and treatment should be symptomatic. Elimination of memantine can be enhanced by acidification of urine.

HOW SHOULD I STORE MEMA?

Store MEMA at room temperature, under 30 ºC. Away from light and moisture.

Keep MEMA out of the reach of children.