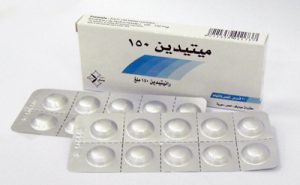 Ranitidine is an antagonist of histamine at gastric H2-receptor sites. Thus, ranitidine inhibits both basal gastric secretion and gastric acid secretion induced by histamine, pentagastrin and other secretagogues. Inhibition of gastric acid secretion has been observed following intravenous, intraduodenal and oral administration of ranitidine. This response is dose-related, a maximum response being achieved at an oral dose of 300 mg/day.

Pepsin secretion is also inhibited but secretion of gastric mucus is not affected. Ranitidine does not alter the secretion of bicarbonate or enzymes from the pancreas in response to secretin and pancreozymin.

Ranitidine is rapidly absorbed after oral administration of 150 mg ranitidine, peak plasma concentrations (300 to 550 ng/mL) occurred after 1 to 3 hours. Two distinct peaks or a plateau in the absorption phase result from reabsorption of drug excreted into the intestine. These plasma concentrations are not significantly influenced by the presence of food in the stomach at the time of the oral administration nor by regular doses of antacids.

Bioavailability of oral ranitidine is approximately 50% to 60%. Serum protein binding of ranitidine in man is in the range of 10 to 19%. The elimination half-life is approximately 2 to 3 hours. The principal route of excretion is the urine (40% recovery of free and metabolized drug in 24 hours).

Syndrome and other conditions where reduction of gastric secretion and acid output is desirable. These include the following:

In addition, METIDINE is indicated for the prophylaxis and maintenance treatment of duodenal or benign gastric ulcer in patients with a history of recurrent ulceration.

METIDINE is contraindicated for patients known to have hypersensitivity to ranitidine or to any ingredient in the formulation.

It may be prudent to monitor SGOT and SGPT in patients receiving intravenous treatment for five days or longer and in those with pre-existing liver diseases. With oral administration, there have been occasional reports of hepatitis, hepatocellular or hepatocanalicular or mixed, with or without jaundice. In such circumstances, ranitidine should be discontinued immediately. These are usually reversible, but in exceedingly rare circumstances, death has occurred.

Very rare cases of acute interstitial nephritis have been reported.

Rare reports of arthralgia and myalgia.

Blood count changes (leukopenia, thrombocytopenia) have occurred in a few patients. These are usually reversible. Rare cases of agranulocytosis or pancytopenia, sometimes with marrow hypoplasia or aplasia have been reported.

No clinically significant interference with endocrine or gonadal function has been reported. There have been a few reports of breast symptoms and breast conditions (such as gynaecomastia and galactorrhoea).

Rash, including cases suggestive of mild erythema multiforme. Rare cases of vasculitis and alopecia have been reported.

Treatment with a histamine H2-antagonist may mask symptoms associated with carcinoma of the stomach and, therefore, may delay diagnosis of that condition. Accordingly, where gastric ulcer is suspected the possibility of malignancy should be excluded before therapy with ranitidine is instituted.

The prolonged use of H2-receptor antagonists may impair the absorption of protein-bound Vitamin B12 and may contribute to the development of cyanocobalamin (vitamin B12) deficiency.

Regular supervision of patients who are taking non-steroidal anti-inflammatory drugs concomitantly with ranitidine is recommended especially in the elderly and in those with a history of peptic ulcer. Baseline endoscopy and histological evaluation is necessary to rule out gastric carcinoma.

Use in Patients with a History of Acute Porphyria:

There are no data on the effects of ranitidine on human fertility. There were no effects on male and female fertility in animal studies.

Experience with ranitidine in children is limited. It has, however, been used successfully in children aged 8 to 18 years in oral doses up to 150 mg twice daily.

Use in Impaired Renal Function:

Ranitidine at usual therapeutic doses does not potentiate the actions of drugs which are inactivated by this enzyme system such as diazepam, lidocaine, phenytoin, propranolol and theophylline. There have been reports of altered prothrombin time with coumarin anticoagulants (e.g. warfarin). Due to the narrow therapeutic index, close monitoring of increased or decreased prothrombin time is recommended during concurrent treatment with ranitidine.

Since ranitidine is partially eliminated by the cationic system, it may affect the clearance of other drugs eliminated by this route. High doses of ranitidine (e.g such as those used in the treatment of Zollinger-Ellison syndrome) may reduce the excretion of procainamide and N-acetylprocainamide resulting in increased plasma levels of these drugs.

Sporadic cases of drug interactions have been reported in elderly patients involving both hypoglycaemic drugs and theophylline. The significance of these reports cannot be determined at present, as controlled clinical trials with theophylline and  ranitidine have not shown interaction.

If high doses (two grams) of sucralfate are coadministered with ranitidine, the absorption of ranitidine may be reduced. This effect is not seen if sucralfate is taken at least two hours after ranitidine administration.

Use in the Elderly:

Since malignancy is more common in the elderly, particular consideration must be given to this before therapy with ranitidine is instituted. Elderly patients receiving non-steroidal anti-inflammatory drugs concomitantly with ranitidine should be closely supervised.

As with all medication in the elderly, when prescribing ranitidine, consideration should be given to the patient’s concurrent drug therapy. Sporadic cases of drug interaction have been reported in elderly patients involving both hypoglycaemic drugs and theophylline. The significance of these reports cannot be determined at present, as controlled clinical trials with theophylline and ranitidine have not shown interaction. Elderly patients may be at increased risk for confusional states and depression.

Pregnancy: The safety of ranitidine in the treatment of conditions where a controlled reduction of gastric secretion is required during pregnancy has not been established. Reproduction studies performed in rats and rabbits have revealed no evidence of ranitidine induced impaired fertility or harm to the fetus. Ranitidine crosses the placenta. Nevertheless, if the administration of ranitidine is considered to be necessary, its use requires that the potential benefits be weighed against possible hazards to the patient and to the fetus.

Lactation: Ranitidine is secreted in breast milk in lactating mothers but the clinical significance of this has not been fully evaluated. Like other drugs, ranitidine should be used during nursing only if considered essential.

300 mg once daily at bedtime or 150 mg twice daily taken in the morning and before retiring. It is not necessary to time the dose in relation to meals. In most cases of duodenal ulcer and benign gastric ulcer, healing will occur in four weeks. In the small number of patients whose ulcers may not have fully healed, these are likely to respond to a further four week course of therapy. In the treatment of duodenal ulcers, 300 mg twice daily for 4 weeks may be of benefit when more rapid healing is desired.

Duodenal ulcers, benign gastric ulcers: Patients who have responded to short-term therapy, particularly those with a history of recurrent ulcer, may benefit from chronic maintenance therapy at a reduced oral dosage of 150 mg once daily at bedtime.

In the management of duodenal ulcers, smoking is associated with a higher rate of ulcer relapse, and such patients should be advised to stop smoking. In those patients who fail to comply with such advice, 300 mg nightly provides additional therapeutic benefit over the 150 mg once daily dosage regimen.

300 mg once daily at bedtime, or alternatively 150 mg twice daily, taken in the morning and before retiring for up to eight weeks. In patients with moderate to severe esophagitis, the dosage of ranitidine may be increased to 150 mg four times daily for up to 12 weeks.

For the long-term management of reflux esophagitis, the recommended adult oral dose is 150 mg twice daily.

150 mg twice daily, taken in the morning and before retiring.

150 mg three times daily may be administered initially. In some patients, it may be necessary to administer ranitidine hydrochloride 150 mg doses more frequently. Doses should be adjusted to individual patient needs. Doses up to six grams per day have been well tolerated.

Treatment of NSAID-induced lesions (both ulcers and erosions) and their gastrointestinal symptoms and prevention of their recurrence:

150 mg the evening prior to anaesthesia induction is recommended, however, 150 mg two hours before anaesthesia induction is also effective. For the prevention of AAS in pre-partum patients who elect for anaesthesia, 150 mg every six hours may be employed, but if general anaesthesia is warranted, a non-particulate oral antacid (for example, sodium citrate) could supplement ranitidine therapy. In an emergency situation, the use of alkalis, antacids, and meticulous anaesthetic technique is still necessary as ranitidine does not affect the pH and volume of the existing gastric content.

An oral dose of 150 mg twice daily may be substituted for the injection once oral feeding commences.

Dosage for the Elderly:

For all conditions listed above, the drug dosage for the elderly who are seriously ill should start at the lowest recommended dose and be adjusted as necessary with close supervision.

There is no experience to date with deliberate overdosage. The usual measures to remove unabsorbed drug from the gastrointestinal tract (including activated charcoal or syrup of ipecac), clinical monitoring and supportive therapy should be employed.