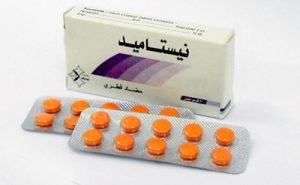 Nystatin interferes with the permeability of the cell membrane of sensitive fungi by binding to sterols, chiefly ergosterol.

Its main action is against Candida spp.

Nystatin is poorly absorbed from the gastrointestinal tract. It is not absorbed through the skin or mucous membranes when applied topically.

Nystatin is contraindicated in patients with a history of hypersensitivity to any of product components.

Nausea, vomiting, diarrhea, and gastrointestinal upset have occasionally been reported after oral use of Nystatin.

Oral irritation or sensitisation may occur.

Rashes, including urticaria, have occurred and Stevens-Johnson syndrome has been reported rarely.

Nystatin oral preparations should not be used for treatment of systemic mycoses.

Discontinue treatment if sensitization or irritation is reported during use.

Use in pregnancy and Lactation:

Nystatin preparations should be prescribed for a pregnant woman only if the potentialbenefit to the mother outweighs the potentialrisk to the fetus.

It is not known whether nystatin is excreted in human milk. Caution should be exercised when nystatin is prescribed for a nursing woman.

No interactions have been reported.

For adults, one or two tablets 3times daily. Treatment should generally be continued for at least 48hours after clinical cure to prevent relapse.

STORAGE: Store in a dry place below 25°C.