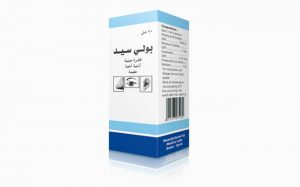 *  Polymyxin  B   and  Neomycin   : have a property of active antibiotics wide spectrum for gram positive and gram negative bacteria Polymyxin  B  is  more  active against pseudomonas pyocyanea .

* Gramicidin : is an active antibiotic for wide spectrum of gram-positive bacteria  except  bacilli  and  gram-negative bacteria especially neisseria

Polycid drops  is indicated for the topical treatment of suferficial infection of the external eye and its adnexa caused by susceptible  bacteria , such infections encompass conjunctivitis , keratitis  and Keratoconjunctivitis  , blepharitis and belpharoconjunctivitis .

Most common  side effects are allergic sensitization reactions including itching , swelling , and conjunctival erythema .

more serious hypersensitivity reactions , including anaphylaxis , have been reported rarely .

– Patients  have  hypersensitivity to any of its components .

* should be given to pregnant woman only if clearly needed

* caution should be used to a nursing mother .

* if purulent discharge , inflammation or pain becomes aggravated , the patient should discontinue use of medication and consult a physician .

* Prolonged   use   may   result  overgrowth organism including fungi .

In severe infections , dosage may be increased to two drops every hour .

Keep in a cool and dry place below 30° c