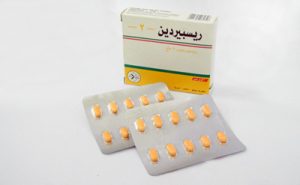 RISPERIDINE is a selective monoaminergic antagonist with high affinity (Ki of 0.12 to 7.3 nM) for the serotonin type 2 (5HT2), dopamine type 2 (D2), (alpha) 1 and (alpha) 2 adrenergic, and H1 histaminergic receptors. Risperidone is well absorbed after oral administration.
Risperidone is extensively metabolized in the liver by cytochrome P 450 IID 6 to a major active metabolite (9-hydroxyrisperidone),. Risperidone could be subject to two kinds of drug-drug interactions. First, inhibitors of cytochrome P450 IID6 could interfere with conversion of Risperidone to 9-hydroxyrisperidone.

Renal Impairment: In patients with moderate to severe renal disease, clearance of the sum of Risperidone and its active metabolite decreased by 60% compared to young healthy subjects. RISPERIDINE doses should be reduced in patients with renal disease
Hepatic Impairment: While the pharmacokinetics of Risperidone in subjects with liver disease were comparable to those in young healthy subjects, the mean free fraction of Risperidone in plasma was increased by about 35% because of the diminished concentration of both albumin and (alpha) 1 -acid
glycoprotein. RISPERIDINE doses should be reduced in patients with liver disease.
Elderly: In healthy elderly subjects renal clearance of both Risperidone and 9-hydroxyrisperidone was decreased, and elimination half-lives were
prolonged compared to young healthy subjects. Dosing should be modified accordingly in the elderly patients.
Race and Gender Effects: No specific pharmacokinetic study was conducted to investigate race and gender effects, but a population pharmacokinetic
analysis did not identify important differences in the disposition of Risperidone due to gender (whether corrected for body weight or not) or race.

Risperidone is indicated for the treatment of schizophrenia.
The anti-schizophrenic efficacy of RISPERIDINE was established in short-term (6 – 8-weeks) controlled trials of schizophrenic inpatients
The effectiveness of RISPERIDINE in long term use, more than 6 to 8 weeks, has not been systematically evaluated in controlled trials. The efficacy of
RISPERIDINE in delaying relapse was demonstrated in schizophrenic patients who had been clinically stable for at least 4 weeks before initiation of
treatment with RISPERIDINE or an active comparator and who were then observed for relapse during a period of 1 to 2 years Therefore, the physician who elects the use of RISPERIDINE for extended periods should periodically re-evaluate the long term usefulness of the drug for the individual patient.

RISPERIDINE is contraindicated in patients with a known hypersensitivity to the product .

Neuroleptic Malignant Syndrome (NMS):
A potentially fatal symptom complex sometimes referred to as Neuroleptic Malignant Syndrome (NMS) has been reported in association with antipsychotic drugs
If a patient requires antipsychotic drug treatment after recovery from NMS, the potential reintroduction of drug therapy should be carefully considered.
The patient should be carefully monitored, since recurrences of NMS have been reported.
Tardive Dyskinesia
A syndrome of potentially irreversible, involuntary, dyskinetic movements may develop in patients treated with antipsychotic drugs. Although the prevalence of the syndrome appears to be highest among the elderly, especially elderly women, it is impossible to rely upon prevalence estimates to predict, at the inception of antipsychotic treatment, which patients are likely to develop the syndrome. Whether antipsychotic drug products differ in their potential to cause tardive dyskinesia is unknown.
If signs and symptoms of tardive dyskinesia appear in a patient on RISPERIDINE drug discontinuation should be considered. However, some patients may require treatment with RISPERIDINE despite the presence of the syndrome.

PRECAUTIONS : General :
Orthostatic Hypotension: RISPERIDINE (Risperidone) may induce orthostatic hypotension associated with dizziness, tachycardia, and in some patients, syncope, especially during the initial dose-titration period, probably reflecting its alpha-adrenergic antagonistic properties
A dose reduction should be considered if hypotension occurs. RISPERIDINE should be used with particular caution in patients with known cardiovascular disease (history of myocardial infarction or ischemia, heart failure, or conduction abnormalities), cerebrovascular disease, and conditions
which would predispose patients to hypotension e.g., dehydration and hypovolemia. Clinically significant hypotension has been observed with concomitant use of RISPERIDINE and antihypertensive medication.
Seizures: During premarketing testing, seizures occurred in 0.3% (9/2607) of RISPERIDINE treated patients, two in association with hyponatremia.
RISPERIDINE should be used cautiously in patients with a history of seizures.
Dysphagia: Esophageal dysmotility and aspiration have been associated with antipsychotic drug use. Aspiration pneumonia is a common cause of morbidity and mortality in patients with advanced Alzheimer’s dementia. RISPERIDINE and other antipsychotic drugs should be used cautiously in
patients at risk for aspiration pneumonia.
Hyperprolactinemia: As with other drugs that antagonize dopamine D2 receptors, Risperidone elevates prolactin levels and the elevation persists during chronic administration. Although disturbances such as galactorrhea, amenorrhea, Gynecomastia, and impotence have been reported with
prolactin-elevating compounds, the clinical significance of elevated serum prolactin levels is unknown for most patients., an increase in pituitary gland, mammary gland, and pancreatic islet cell hyperplasia and/or neoplasia was observed in the Risperidone carcinogenicity studies conducted in mice and
rats.
Potential for Cognitive and Motor Impairment: Somnolence was a commonly reported adverse event associated with RISPERIDINE treatment, especially when ascertained by direct questioning of patients. This adverse event is dose related, and in a study utilizing a checklist to detect adverse
events. Since RISPERIDINE has the potential to impair judgment, thinking, or motor skills, patients should be cautioned about operating hazardous machinery, including automobiles, until they are reasonably certain that RISPERIDINE therapy does not affect them adversely.
Priapism: Rare cases of priapism have been reported. While the relationship of the events to RISPERIDINE use has not been established, other drugs with alpha-adrenergic blocking effects have been reported to induce priapism.
Thrombotic Thrombocytopenic Purpura (TTP): A single case of TTP was reported in a 28 year-old female patient receiving RISPERIDINE.
Antiemetic effect: Risperidone has an antiemetic effect in animals; this effect may also occur in humans, and may mask signs and symptoms of overdosage with certain drugs or of conditions such as intestinal obstruction.
Suicide: The possibility of a suicide attempt is inherent in schizophrenia, and close supervision of high risk patients should accompany drug therapy.
Prescriptions for RISPERIDINE should be written for the smallest quantity of tablets consistent with good patient management, in order to reduce the risk of overdose.
The effect of RISPERIDINE on labor and delivery in humans is unknown.

DRUG INTERACTIONS : The interactions of RISPERIDINE and other drugs have not been systematically evaluated. -Given the primary CNS effects
-Because of its potential for inducing hypotension, RISPERIDINE may enhance the hypotensive effects of other therapeutic agents with this potential.
-RISPERIDINE may antagonize the effects of levodopa and dopamine agonists.
-Chronic administration of Carbamazepine with Risperidone may increase the clearance of Risperidone.
-Chronic administration of Clozapine with Risperidone may decrease the clearance of Risperidone.
-Fluoxetine may increase the plasma concentration of the anti-psychotic fraction (Risperidone plus 9-hydroxyrisperidone) by raising the concentration
of Risperidone, although not the active metabolite, 9-hydroxyrisperidone).
-Drugs that Inhibit Cytochrome P450 IID6 and Other P450 Isozymes: Risperidone is metabolized to 9-hydroxyrisperidone by cytochrome P 450 IID
an enzyme that is polymorphic in the population and that can be inhibited by a variety of psychotropic and other drugs
PEDIATRIC USE : Safety and effectiveness in children have not been established.
GERIATRIC USE : This drug is known to be substantially excreted by the kidney, and the risk of toxic reactions to this drug may be greater in patients with impaired renal function. Because elderly patients are more likely to have decreased renal function, care should be taken in dose selection, and it may be useful to monitor renal function.

MANAGEMENT OF OVERDOSAGE: In case of acute overdosage, establish and maintain an airway and ensure adequate oxygenation and ventilation. Gastric lavage (after intubation, if patient is unconscious) and administration of activated charcoal together with a laxative should be
considered. The possibility of obtundation, seizures or dystonic reaction of the head and neck following overdose may create a risk of aspiration with induced emesis. Cardiovascular monitoring should commence immediately and should include continuous electrocardiographic monitoring to detect
possible arrhythmias.
There is no specific antidote to RISPERIDINE Therefore appropriate supportive measures should be instituted.

Usual Initial Dose: RISPERIDINE (Risperidone) can be administered on either a BID or a QD schedule. In early clinical trials, RISPERIDINE was generally administered at 1 mg BID initially, with increases in increments of 1 mg BID on the second and
third day, as tolerated, to a target dose of 3 mg BID by the third day. Subsequent controlled trials have indicated that total daily Risperidone doses of up to 8 mg on a QD regimen are also safe and effective. However, regardless of which regimen is employed, in some patients a slower titration may
be medically appropriate. Further dosage adjustments, if indicated, should generally occur at intervals of not less than 1 week, since steady state for the active metabolite would not be achieved for approximately 1 week in the typical patient. When dosage adjustments are necessary, small
increments/decrements of 1-2 mg are recommended.
Anti-schizophrenic efficacy was demonstrated in a dose range of 4 to 16 mg/day in the clinical trials supporting effectiveness of RISPERIDINE, however, maximal effect was generally seen in a range of 4 to 8 mg/day. Doses above 6 mg/day for BID dosing were not demonstrated to be more
efficacious than lower doses, were associated with more Extrapyramidal symptoms and other adverse effects, and are not generally recommended. In a single study supporting QD dosing, the efficacy results were generally stronger for 8 mg than for 4 mg. The safety of doses above 16 mg/day has not
been evaluated in clinical trials.
Dosage in Special Populations: The recommended initial dose is 0.5 mg BID in patients who are elderly or debilitated, patients with severe renal or hepatic impairment, and patients either predisposed to hypotension or for whom hypotension would pose a risk. Dosage increases in these patients
should be in increments of no more than 0.5 mg BID. Increases to dosages above 1.5 mg BID should generally occur at intervals of at least 1 week. In some patients, slower titration may be medically appropriate.
Maintenance therapy: while there is no body of evidence available to answer the question of how long the schizophrenic patient treated with RISPERIDINE should remain on it, the effectiveness of RISPERIDINE 2 mg/day to 8 mg/day at delaying relapse was demonstrated in a controlled
trial in patients who had been clinically stable for at least 4 weeks and were then followed for a period of 1 to 2 years. In this trial, RISPERIDINE was administered on a QD schedule, at 1 mg QD initially, with increases to 2 mg QD on the second day and to target dose of 4 mg QD on the third
day. Nevertheless, patients should be periodically reassessed to determine the need for maintenance treatment with appropriate dose.