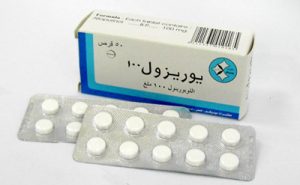 Allopurinol is a xanthine-oxidase inhibitor. Allopurinol and its main metabolite oxipurinol lower the level of uric acid in plasma and urine by inhibition of xanthine oxidase, the enzyme catalyzing the oxidation of hypoxanthine to xanthine and xanthine to uric acid. In addition to the inhibition of purine catabolism in some patients.

Distribution: Allopurinol is negligibly bound by plasma proteins. The volume of distribution is approximately 1.6 L/kg

Metabolism: The main metabolite of the drug is oxipurinol.

The drug should not be administered to individuals known to be hypersensitive to allopurinol or to any of its components.

Since adverse reactions such as somnolence, vertigo and ataxia have been reported in patients receiving allopurinol, patients should exercise caution before driving.

Older people: the lowest dosage which produces satisfactory urate reduction should be used.

Patients with renal impairment: In severe renal insufficiency, it may be advisable to use less than 100 mg per day or to use single doses of 100 mg at longer intervals than one day.

Symptoms: nausea, vomiting, diarrhoea and dizziness in a patient who ingested 20 g allopurinol.

Treatment: Adequate hydration to maintain optimum diuresis facilitates excretion of allopurinol and its metabolites also, haemodialysis may be used.

Keep in a cool and dry place below 25°C.