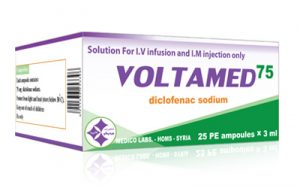 Ampoules for IM use:

The ampoules are effective in acute forms of pain, including renal colic, exacerbations of osteo- and rheumatoid arthritis, acute back pain, acute gout, acute trauma and fractures, and post-operative pain.

For treatment or prevention of post-operative pain in the hospital setting.

Posology and method of administration:

Undesirable effects may be minimized by using the lowest effective dose for the shortest duration necessary to control symptoms.

Voltamed ampoules (given IM or IV) should not be given for more than two days; if necessary, treatment can be continued with Voltamed tablets or suppositories.

The following directions for intramuscular injection must be adhered to in order to avoid damage to a nerve or other tissue at the injection site.

One ampoule once (or in severe cases twice) daily intramuscularly by deep intragluteal injection into the upper outer quadrant. If two injections daily are required it is advised that the alternative buttock be used for the second injection. Alternatively, one ampoule of 75mg can be combined with other dosage forms of Voltamed (tablets or suppositories) up to the maximum daily dosage of 150mg.

One 75mg ampoule intramuscularly. A further ampoule may be administered after 30 minutes if necessary.

The recommended maximum daily dose of Voltamed is 150mg

Voltamed must not be given as an intravenous bolus injection.

It is recommended that the lowest effective dosage be used in frail elderly patients or those with a low body weight and the patient should be monitored for GI bleeding during NSAID therapy.

Diclofenac is contraindicated in patients with severe renal impairment.

Diclofenac is contraindicated in patients with severe hepatic impairment.

Voltamed ampoules are not recommended for use in children.

The recommended maximum daily dose of Voltamed is 150mg

Undesirable effects may be minimized by using the lowest effective dose for the shortest duration necessary to control symptoms.

The concomitant use of Voltamed with systemic NSAIDs including cyclooxygenase-2 selective inhibitors should be avoided due to the absence of any evidence demonstrating synergistic benefits and the potential for additive undesirable effects.

It is recommended that the lowest effective dose be used in frail elderly patients or those with a low body weight.

As with other nonsteroidal anti-inflammatory drugs including diclofenac, allergic reactions, including anaphylactic/anaphylactoid reactions can also occur without earlier exposure to the drug.

Like other NSAIDs, diclofenac may mask the signs and symptoms of the due to its pharmacodynamic properties.

The sodium metabisulphite present in solution for injection can also lead to isolated severe hypersensitivity reactions and bronchospasm.

Gastrointestinal bleeding (haematemesis, melaena), ulceration or perforation which can be fatal has been reported with all NSAIDs including diclofenac and may occur at any time during treatment, with or without warning symptoms or a previous history of serious GI events. They generally have more serious consequences in the elderly.

If gastrointestinal bleeding or ulceration occurs in patients receiving diclofenac, the drug should be withdrawn.

As with all NSAIDs, including diclofenac, close medical surveillance is imperative and particular caution should be exercised when prescribing diclofenac in patients with symptoms indicative of gastrointestinal disorders, or with a history suggestive of gastric or intestinal ulceration, bleeding or perforation.

The risk of GI bleeding, ulceration or perforation is higher with increasing NSAID doses including diclofenac, and in patients with a history of ulcer, particularly if complicated with haemorrhage or perforation.

The elderly have increased frequency of adverse reactions to NSAIDs especially gastro intestinal bleeding and perforation which may be fatal.

To reduce the risk of GI toxicity in patients with a history of ulcer, particularly if complicated with haemorrhage or perforation, and in the elderly, the treatment should be initiated and maintained at the lowest effective dose.

Patients with a history of GI toxicity, particularly when elderly, should report any unusual abdominal symptoms (especially GI bleeding).

Caution is recommended in patients receiving concomitant medications which could increase the risk of ulceration or bleeding, such as systemic corticosteroids, anticoagulants such as warfarin, selective serotonin-reuptake inhibitors (SSRIs) or anti-platelet agents such as acetylsalicylic acid.

Close medical surveillance and caution should be exercised in patients with ulcerative colitis, or with Crohn’s disease as these conditions may be exacerbated

Close medical surveillance is required when prescribing Voltamed to patients with impairment of hepatic function as their condition may be exacerbated.

As with other NSAIDs, including diclofenac, values of one or more liver enzymes may increase.

During prolonged treatment with Diclofenac, regular monitoring of hepatic function is indicated as a precautionary measure.

If abnormal liver function tests persist or worsen, clinical signs or symptoms consistent with liver disease develop or if other manifestations occur (eosinophilia, rash), Voltamed should be discontinued.

Hepatitis may occur with diclofenac without prodromal symptoms.

Caution is called for when using diclofenac in patients with hepatic porphyria, since it may trigger an attack.

As fluid retention and oedema have been reported in association with NSAIDs therapy, including diclofenac, particular caution is called for in patients with impaired cardiac or renal function, history of hypertension, the elderly, patients receiving concomitant treatment with diuretics or medicinal products that can significantly impact renal function

Monitoring of renal function is recommended as a precautionary measure when using diclofenac in such cases. Discontinuation therapy is usually followed by recovery to the pre-treatment state.

Serious skin reactions, some of them fatal, including exfoliative dermatitis, Stevens-Johnson syndrome and toxic epidermal necrolysis, have been reported very rarely in association with the use of NSAIDs, including Voltamed.

Voltamed should be discontinued at the first appearance of skin rash, mucosal lesions or any other signs of hypersensitivity.

In patients with systemic lupus erythematosus (SLE) and mixed connective tissue disorders there may be an increased risk of aseptic meningitis.

Patients with significant risk factors for cardiovascular events (e.g. hypertension, hyperlipidaemia, diabetes mellitus, and smoking) should only be treated with diclofenac after careful consideration.

As the cardiovascular risks of diclofenac may increase with dose and duration of exposure, the shortest duration possible and the lowest effective daily dose should be used.

The patient’s need for symptomatic relief and response to therapy should be re-evaluated periodically.

Appropriate monitoring and advice are required for patients with a history of hypertension and/or mild to moderate congestive heart failure as fluid retention and oedema have been reported in association with NSAID therapy including diclofenac.

Clinical trial consistently point towards increased risk of arterial thrombotic events (for example myocardial infarction or stroke) associated with the use of diclofenac, particularly at high dose (150mg daily) and in long term treatment.

During prolonged treatment with diclofenac, as with other NSAIDs, monitoring of the blood count is recommended.

Voltamed may reversibly inhibit platelet aggregation. Patients with defects of haemostasis, bleeding diathesis or haematological abnormalities should be carefully monitored.

The ampoules used IM or IV as an infusion should not be mixed with other injection solutions.

Lithium: If used concomitantly, Voltamed may increase plasma concentrations of lithium. Monitoring of the serum lithium level is recommended.

Digoxin: If used concomitantly, Voltamed may raise plasma concentrations of digoxin. Monitoring of the serum digoxin level is recommended.

Like other NSAIDs, concomitant use of Voltamed with diuretics and antihypertensive agents (e.g. beta-blockers, angiotensin converting enzyme (ACE) inhibitors may cause a decrease in their antihypertensive effect via inhibition of vasodilatory prostaglandin synthesis.

Therefore, the combination should be administered with caution and patients, especially the elderly, should have their blood pressure periodically monitored.

Drugs known to cause hyperkalemia: Concomitant treatment with potassium-sparing diuretics, ciclosporin, tacrolimus or trimethoprim may be associated with increased serum potassium levels, which should therefore be monitored.

Anticoagulants and anti-platelet agents: Caution is recommended since concomitant administration could increase the risk of bleeding. Although clinical investigations do not appear to indicate that Voltamed has an influence on the effect of anticoagulants, there are isolated reports of an increased risk of haemorrhage in patients receiving diclofenac and anticoagulant concomitantly.

Therefore, close monitoring of such patients is required. As with other nonsteroidal anti-inflammatory agents, diclofenac in a high dose can reversibly inhibit platelet aggregation.

Other NSAIDs including cyclooxygenase-2 selective inhibitors and corticosteroids: Co-administration of diclofenac with other systemic NSAIDs or corticosteroids may increase the risk of gastrointestinal bleeding or ulceration. Avoid concomitant use of two or more NSAIDs.

Clinical studies have shown that Voltamed can be given together with oral antidiabetic agents without influencing their clinical effect.

Diclofenac, like other NSAIDs, may increase the nephrotoxicity of ciclosporin due to the effect on renal prostaglandins. Therefore, it should be given at doses lower than those that would be used in patients not receiving ciclosporin.

Possible increased risk of nephrotoxicity when NSAIDs are given with tacrolimus.

Convulsions may occur due to an interaction between quinolones and NSAIDs.

Caution should be exercised when considering the use of a quinolone in patients who are already receiving an NSAID.

When using phenytoin concomitantly with diclofenac, monitoring of phenytoin plasma concentrations is recommended due to an expected increase in exposure to phenytoin.

These agents can induce a delay or decrease in absorption of diclofenac. Therefore, it is recommended to administer diclofenac at least one hour before or 4 to 6 hours after administration of colestipol/ cholestyramine.

Concomitant use of cardiac glycosides and NSAIDs in patients may exacerbate cardiac failure, reduce GFR and increase plasma glycoside levels.

Mifepristone: NSAIDs should not be used for 8-12 days after mifepristone administration as NSAIDs can reduce the effect of mifepristone.

Inhibition of prostaglandin synthesis may adversely affect the pregnancy and/or the embryo/foetal development.

Voltamed is contra-indicated during the third trimester of pregnancy

Like other NSAIDs, diclofenac passes into breast milk in small amounts. Therefore, diclofenac should not be administered during breast feeding in order to avoid undesirable effects in the infant.

There is no typical clinical picture resulting from diclofenac over dosage. Over dosage can cause symptoms such as headache, nausea, vomiting, epigastric pain, gastrointestinal bleeding, diarrhea, dizziness, disorientation, excitation, coma, drowsiness, tinnitus, fainting or convulsions. In the case of significant poisoning acute renal failure and liver damage are possible

5 Plastic ampoules each of them is 3 mL

25 plastic ampoules each of them is 3 mL

Protect from light and heat (store below 30°C).