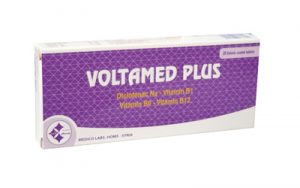 This product is a combination of three essential neurotropic vitamins: thiamine (vitamin B1), pyridoxine (vitamin B6) and Cyanocobalamin (vitamin B12) in high doses with diclofenac which is non-steroidal anti-inflammatory drugs (NSAIDS).

Thiamine, pyridoxine and cyanocobalamin have particular importance for the metabolism in the peripheral and central nervous system.  In addition, it provides a synergistic effect to the action anti-nociceptive of diclofenac in mixed pain.

Vitamin B1: After oral administration, vitamin B1 is absorbed into the duodenum. After absorption by the intestinal mucosa, the Vitamin B1 is transported to the liver. Vitamin B1 is eliminated with a half-life of one hour.

Vitamin B6: Vitamin B6 is rapidly absorbed, especially in the gastrointestinal tract, and Transported to the organs and tissues. Vitamin B6 passes into the cerebrospinal fluid, is excreted in breast milk and crosses the placenta.

Vitamin B12: The absorption of vitamin B12 by the gastrointestinal tract is performed through two mechanisms. Vitamin B12 is predominantly excreted by bile, most of which is reabsorbed via enterohepatic circulation.

Diclofenac sodium: Diclofenac is rapidly and completely absorbed in the duodenum, reaching peak plasma concentrations after two or three hours. It is metabolized in the liver by Cytochrome P450 of the subfamily CYP2C. The metabolites are excreted in the urine (65%) and in the bile (35%). The Elimination half-life of is 1.2 to 2 hours.

Effects on ability to drive and operate machinery:

Patients who have visual disturbance, dizziness, drowsiness or other Disorders of the central nervous system during treatment with diclofenac should avoid driving vehicles and/or operate machinery.

Diclofenac has been shown to inhibit implantation and embryonic development in rats. Administered late in pregnancy may also cause premature closure of the ductus arteriosus. Diclofenac may induce embryopathy. Therefore, this medicinal product must not be used by pregnant women or women who may become pregnant during treatment.

Thiamine, pyridoxine, and cyanocobalamin are excreted into human milk, but the risks of an overdose for the baby are not known. Diclofenac has been found in human milk in small amounts. Therefore, this drug should not be used during breastfeeding.

Use in the elderly and in children:

Caution is advised when used in elderly, debilitated patients or those with low body weight, and the use of the lowest effective dose is recommended. Diclofenac is not indicated for children less than 14 years of age, except for cases of chronic juvenile arthritis.

Posology and method of administration:

1 tablet two to three times daily. The tablets should be swallowed whole with liquid, preferably after meals. It is recommended that the duration of treatment preferably, is as short as possible.

There have been cases of overdose with thiamine or cyanocobalamin. Sensory Neuropathy and other sensory neuropathic syndromes caused by the administration of high Doses of pyridoxine improve gradually with the discontinuation of vitamin. In the event of acute poisoning with diclofenac, symptomatic and supportive measures are recommended for complications such as hypotension, renal failure, convulsions, gastrointestinal irritation or respiratory insufficiency.

Storage conditions: Do not store above 30˚c