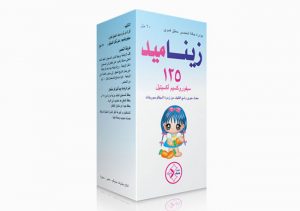 After oral administration cefuroxime axetil is absorbed from the gastrointestinal tract and rapidly hydrolysed in the intestinal mucosa and blood to release cefuroxime into the circulation. Optimum absorption occurs when it is administered shortly after a meal.

The rate of absorption of cefuroxime from the suspension is reduced compared with the tablets, leading to later, lower peak serum levels and reduced systemic bioavailability (4 to 17% less). Cefuroxime axetil oral suspension is not bioequivalent to cefuroxime axetil tablets, and therefore is not substitutable on a milligram-per-milligram basis. Protein binding has been stated as 33 to 50% depending on the methodology used. Cefuroxime passes the blood-brain barrier when the meninges are inflamed. Cefuroxime is not metabolised. The serum half-life is between 1 and 1.5 hours. Cefuroxime is effectively removed by dialysis.

Cefuroxime is indicated for the treatment of the infections listed below in adults and children from the age of 3 months.

Cefuroxime is contraindicated in patients with a known allergy to the cephalosporin group of antibiotics.

It is also contraindicated in patients with a history of severe hypersensitivity (e.g. anaphylactic reaction) to any other type of betalactam antibacterial agent (penicillins, monobactams and carbapenems).

Overgrowth of non-susceptible microorganisms: As with other antibiotics, use of cefuroxime axetil may result in the overgrowth of Candida. Prolonged use may also result in the overgrowth of other non-susceptible microorganisms (e.g. enterococci and Clostridium difficile), which may require interruption of treatment. Antibacterial agent–associated pseudomembranous colitis have been reported with nearly all antibacterial agents, including cefuroxime and may range in severity from mild to life threatening. This diagnosis should be considered in patients with diarrhoea during or subsequent to the administration of cefuroxime. Discontinuation of therapy with cefuroxime and the administration of specific treatment for Clostridium difficile should be considered.

Interference with diagnostic tests: It is recommended that either the glucose oxidase or hexokinase methods are used to determine blood/plasma glucose levels in patients receiving cefuroxime axetil.

There are limited data from the use of cefuroxime in pregnant women. Cefuroxime-MP should be prescribed to pregnant women only if the benefit outweighs the risk.

Cefuroxime is excreted in human milk in small quantities. Adverse effects at therapeutic doses are not expected, although a risk of diarrhoea and fungus infection of the mucous membranes cannot be excluded. Breastfeeding might have to be discontinued due to these effects. Cefuroxime should only be used during breastfeeding after benefit/risk assessment by the physician.

Effect on driving and operating machines:

As this medicine may cause dizziness, patients should be warned to be cautious when driving or operating machinery.

Drugs which reduce gastric acidity may result in a lower bioavailability of cefuroxime axetil compared with that of the fasting state and tend to cancel the effect of enhanced absorption after food.

Concomitant use with oral anticoagulants may give rise to increased INR.

DOSAGE AND METHOD OF ADMINISTRATION:

For optimal absorption cefuroxime axetil suspension should be taken with food.

The usual course of therapy is seven days (may range from five to ten days).

There is no experience of using Cefuroxime in children under the age of 3 months.

In infants (from the age of 3 months) and children with a body mass of less than 40 kg, it may be preferable to adjust dosage according to weight or age. The dose in infants and children 3 months to 18 years is 10 mg/kg twice daily for most infections, to a maximum of 250 mg daily. In otitis media or more severe infections the recommended dose is 15 mg/kg twice daily to a maximum of 500 mg daily.

Overdose can lead to neurological sequelae including encephalopathy, convulsions and coma. Symptoms of overdose can occur if the dose is not reduced appropriately in patients with renal impairment. Serum levels of cefuroxime can be reduced by haemodialysis and peritoneal dialysis.

The constituted suspension should be stored in a refrigerator (4-8) °C and used within 10 days.