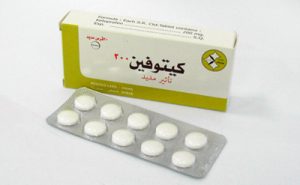 Properties :
Ketoprofen a propionic acid derivative , is non steroidal anti-inflammatory drug with analgesic , anti
pyretic and anti-inflammatory properties .
Ketoprofen acts by inhibiting the cyclo – oxygenizes which are involved in the biosynthesis of
prostaglandins.
Ketophen tablets are designed to resist dissolution in the low PH of gastric fluid but release drug at a
controlled rate in the higher PH of the small intestine.

Precautions:
-Ketophen should be used with caution in patients with haemorrhagic disorders , asthma , hypertension
and impaired renal , hepatic or cardiac function .
– should be used with caution in elderly patients.
-Physicians should follow chronically treated patients for the signs and symptoms of ulceration and
bleeding and should inform them about the importance of this follow-up.

Dosage and Administration:
-The usual daily dose is 200 mg with food .
– Doses higher than 200 mg/day are not recommended.